After composer update I am on the dev branch. I don’t think, this should happen. Have I done anything wrong? 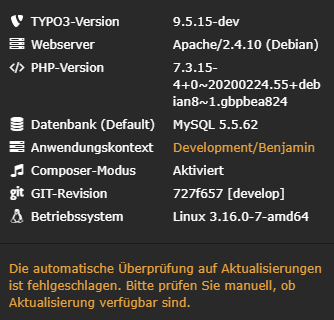 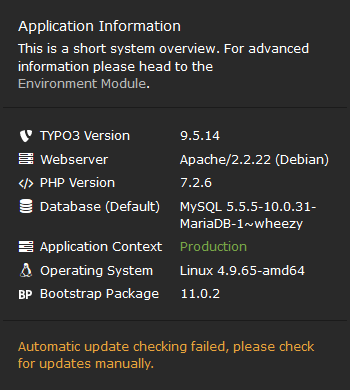 The tag v9.5.15, clearly shows that the constant TYPO3_version was updated from ‘9.5.15-dev’ to ‘9.5.15’. And yet when installing that version via composer, this is not what we receive as demonstrated in an empty folder:

This seems to indicate that the package delivered via composer is not the same as the repository. Was the release process somehow buggy ?

Coming back to the original repository we can find out that it means that v9.5.15 delivered via composer is lacking 4 commits. Specifically “[BUGFIX] Revert: Make default folder structure aware of ‘web-dir’ option” and the release commit might be a problem for some installations.

No database upgrades are required for these maintenance releases.

This information is not correct.

EDIT: Please do not use the my described method. Use the downgrade method described in the article.

The tag was changed without notifying us. So: remove the core extension, clear the composer cache, remove the lock file and do a composer install. Now you should have the correct version.

The tag was changed without notifying us

This is bad practice and should be prevented by using annotated tags instead of lightweight tags. Otherwise anybody can “re-release” any previous version with any new content at any point in time. Breaking a lot of assumptions for end-users (composer.lock cannot guarantee consistent result anymore), and opening security holes in case of bad actor gaining access to repository.

Who/where does this bug should be reported to ?

Removing the lock file, means all packages will be updated. This should be fine if you declare your dependencies correctly in composer.json and all your dependencies strictly conforms to semver. But even then, it can also introduce legitimate bugs.

This should have been avoided by cleanly releasing a brand new v9.5.16, instead of overwriting an existing release.

Thank you for letting us know. Database upgrade are indeed required.

@benni could you please edit the news to reflect that ?

This can quickly be seen via the following command:

Thanks for your replies. The database tables is not required - that is the main point. It solves an edge-side issue on PostgreSQL and having nullable processed file crop areas. This is solved, but this worked for 99.9% of the users before and after. So doing this change is not required at all.

In general it probably might make sense to add another comment. “There are database changes, but only needed in certain circumstances”.

The tagging system for the subtree split did not work out during the release. This tagging script is responsible for adding tags to certain subrepositories for the “composer-mode” packages. This tagging script is maintained by TYPO3 GmbH - so I did not know what to do. The solution was only found 24hs later, where existing tags were force-pushed again. I will update the news accordingly.

Thank you for taking the time to amend the news. Recommending a composer downgrade to 9.5.14 is a good idea.

Thanks for the hint. You are right, my method of getting the new tagged commit was risky. We had the right setup for it. But of course: that can’t be guaranteed.